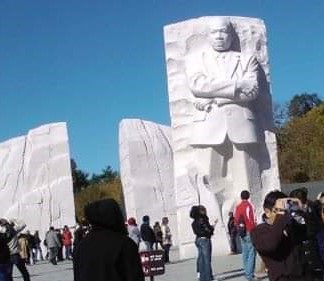 It has been more than 50 years (1969) since Executive Order (EO) 11458 was signed by President Richard M Nixon.  Executive Order 11458 and Executive Order 11625 which expanded the scope of the first EO, provided a national program for the development of minority business enterprises. The supplier diversity programs of today are the result of a convoluted meshing of civil rights acts, small business acts and presidential executive orders that could be issued as a result of these acts. Programs such as 8a were the result. Ironically, Dr. Martin Luther King Jr. never lived to see this day despite his profound influence on Presidents Kennedy, Johnson & Nixon and the executive orders and acts they produced.

Barry Carter at NJ.com says, “We get caught up in the quote, in his cadence, and rightfully so. But what seems to get lost from that speech and in each annual celebration of his life since then is King’s message of economic equality for blacks.” Near the end of his life, DR. MARTIN LUTHER KING JR. was moving into the “What’s Next” stage of his movement. Asking the question “Where do we go from here?” Now that he had worked to get African Americans jobs, it was time to look at really sharing the wealth by providing a path for African American businesses to flourish. Let’s look at the effect that DR. MARTIN LUTHER KING JR.’s work had on supplier diversity and African American business growth as a path to economic equality.

But let’s go back to the influence of DR. MARTIN LUTHER KING JR. on Executive Order 11458.  Richard Nixon served as chairman of the President’s Committee on Government Contracts (PCGC) enforcing nondiscrimination in companies receiving federal contracts.  As Vice President, Nixon was responsible for spearheading Eisenhower’s Civil Rights Act of 1957, battling high-ranking Southern democrats like Richard Russell of Georgia, and Senate Majority Leader Lyndon Johnson (interesting).  DR. MARTIN LUTHER KING JR. and Richard Nixon were friends until Nixon refused to intervene when King was arrested in Georgia in 1960 on a phony traffic charge.  They met in Ghana when the country celebrated its independence and stayed in touch.  Although Eisenhower got credit for the Civil Rights Bill of 1957, it was Richard Nixon who strengthened the original proposal and crafted the bill that was ultimately signed.  He often consulted with DR. MARTIN LUTHER KING JR.  Nixon once wrote to King, “I am sure you know how much I appreciate your generous comments. My only regret is that I have been unable to do more than I have.”

This 1957 bill and a second civil rights bill in 1960 became the forerunners for the Civil Rights Act of 1964.  In the fall of 1963, a comprehensive civil rights bill cleared several hurdles in Congress and won the endorsement of House and Senate Republican leaders. It was not passed, however, before November 22, 1963, when President Kennedy was assassinated. The bill was left in the hands of Lyndon B. Johnson.  The Civil Rights Act of 1964 gave the government the legal right to mandate equal employment.  “Before becoming vice president, Johnson had served more than two decades in Congress as a congressman and senator from Texas. He used his connections with southern white congressional leaders, and with the assistance of Robert Kennedy’s Justice Department and the outpouring of emotion after the president’s assassination, the Civil Rights Act was passed as a way to honor President Kennedy.”

The equal rights and equal opportunity initiatives that DR. MARTIN LUTHER KING JR. championed were finding their way into federal contracting laws through executive orders.  For example, Executive Orders 10925 signed by JFK Established the President’s Committee on Equal Employment Opportunity.  This Executive Order created an enforcement authority to enforce Executive Order 8802 signed by Franklin D Roosevelt in 1941 which required that government contractors use equal opportunity practices when hiring.  This allowed minorities to be employed and learn to build their own businesses.  Kennedy’s order allowed the government to sanction those who violated Roosevelt’s Order.  Executive Order 11246 signed by Johnson required that contractors provide documentation of hiring and employment practices.

“President John F. Kennedy is often credited with being a champion of civil rights, but, in fact, he was a reluctant advocate. He only delivered his famous speech describing civil rights as a “crisis” and a moral issue in 1963 after years of racial confrontations about school desegregation and violent protests in many American cities.  Only when he saw the brutal attacks by Birmingham, Alabama police on peaceful student demonstrators, egged on by the governor and the mayor, did he realize he had to speak to the nation.”  “In the end, DR. MARTIN LUTHER KING JR., his allies, and Robert Kennedy succeeded in pushing the reluctant president to take action. After his speech, Kennedy sent a major piece of civil rights legislation to Congress that became the Civil Rights Act of 1964, signed by President Lyndon Johnson.” 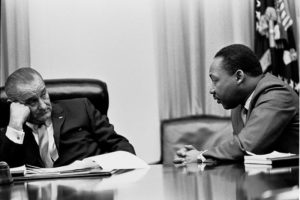 Executive Orders 10925 and 11246, although focused on equal employment provided opportunity for minorities in government contracting.  As these workers started creating their own businesses to answer the government needs, what was now needed was a way to develop a class of minority small business owners.

As the focus turned to economic equality, programs for African American businesses were being instituted.  The first program implemented was the President’s Test Cities Program (PTCP) under Johnson.  This program was meant to provide a set-aside for businesses that relocated to urban areas and hire the unemployed and African Americans.  It also offered awards to companies that sponsored minority-owned businesses by providing management and financing assistance.  In DR. MARTIN LUTHER KING JR.’s letter from a Birmingham jail, he says of LBJ, “I had been fortunate enough to meet Lyndon Johnson during his tenure as Vice President. His approach to the problem of civil rights was not identical with mine—nor had I expected it to be. Yet his careful practicality was, nonetheless, clearly no mask to conceal indifference. His emotional and intellectual involvement was genuine and devoid of adornment. It was conspicuous that he was searching for a solution to a problem he knew to be a major shortcoming in American life …”

The program, we know as 8a came later.  “The Minority Small Business and Capital Ownership Development Program—commonly known as the “8(a) Program”—provides participating small businesses with training, technical assistance, and contracting opportunities in the form of set-aside and sole-source awards.”  “When the Small Business Act of 1958 transformed the Small Business administration (SBA) into a permanent agency, this subcontracting authority was included in Section 8(a).   At its inception, the SBA’s subcontracting authority was not limited to small businesses owned and controlled by the socially and economically disadvantaged. Under the original Section 8(a), the SBA could contract with any “small-business. Note: small business programs were originally started during war times to enable the federal government to help businesses that produced materials needed for the war effort.

“During the Nixon Administration, the SBA promulgated its earliest regulations for the 8(a) Program. In 1970, the first of these regulations articulated the SBA’s policy of using Section 8(a) to “assist small concerns owned by disadvantaged persons to become self-sufficient, viable businesses capable of competing effectively in the marketplace.”  Contracting with minority owned businesses within the private sector grew after the creation of the National Minority Supplier Development Council in 1972.  This program provided opportunities for business owners such as Avis Yates Rivers, CEO of TCGi, which she used to build a competitive business.  The program provided training and access to financing for small businesses to grow.  Imagine getting that contract but not having the capital to ramp up production.  The SBA provided access to low interest loans and management training for new business owners.

In DR. MARTIN LUTHER KING JR.’s 1963 “I Have a Dream” speech, Dr King Jr. talks about economic equality.  He was calling on Blacks to patronize Black businesses such as banks and insurance companies.  Today with more than $1 trillion in buying power, Black consumers can yield a mighty stick.  “Until we (Blacks) develop a passion for economic strategy and entrepreneurship, we are going to be the only group left in America waiting for a bail out,” said Rev. DeForest Soaries, senior pastor of First Baptist Church of Lincoln Gardens in Somerset, NJ.  “Every immigrant group that has come here has majored in business development.  We ought to zoom in on what King was trying to say and that is let’s not forsake the building of our own.”

The Unmet Dream:  Dr. Martin Luther King Jr. and Diversity at the Top

The Impact of a Dream: Reflecting on Dr. Martin Luther King Jr.

When Martin Luther King Jr. and Richard Nixon Were Friends