Fittingly, Steve Wozniak, one half of the original Apple founding Dynamic Duo, was the Keynote Speaker at the ATX Automation Innovation East Event in NYC on June 13th to discuss the beginnings of Apple, his relationship with Steve Jobs and how they changed the world.

Even if your preference has always been the pc and Microsoft Windows and swear by your Samsung Galaxy S7 powered by Android, there is no denying that Apple through the innovative thinking of their primary founders, set the gold standard for personal computing and ultimately portable personal devices. They started a technology innovation revolution.

Jobs, was the marketing genius who forever changed the esthetics-of-technology universe. Wozniak was the innovative computer designer who created more with less during Apple’s first iteration. 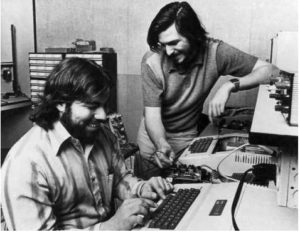 Wozniak spent his early years building little projects for fun. He reflected back on how each project was another step in his learning for what was about to come.

Owning a computer was not possible when he was 16, so he got a manual that described the insides of a computer, the architecture, and hooked up a whole computer on paper.

The extent of his computer-designing prowess at that point was limited to paper and the thought of making a living in computers was not even in his realm of possibility.

“I didn’t think it was valuable, I didn’t think I’d have a job designing computers, I didn’t think there were jobs for computer design, I thought that computers were designed in weird places called research.” (this got a big laugh at the conference).

When Wozniak got a job with Hewlett Packard as an engineer, he thought to himself that he would spend the rest of his life there, it was his dream job — being content to focus on solving engineering challenges, designing unique products and avoiding the politics and conflict of management.

“As an engineer I would design products for other engineers, these are products you would use yourself, you don’t need a marketing person to say what you should build because I knew what the need and the value was.”

Making huge sums of money off of his ideas and projects was simply not important to him. As Wozniak bounced his many ideas off of Jobs (they were introduced in 1971 because they both liked electronics and playing pranks), it was Jobs who would try to find ways to monetize them.

Then came the Apple II. Wozniak drafted the design on paper, wired all the chips on the board, and tested them—he had a working prototype to demonstrate. He and Jobs believed it would change the world.

Wozniak made the details of his design available to the public in a 1977 Byte magazine article. This spurred at least 1000 companies to make accessories for the computer and in essence provided free advertising!

The article began “To me, a personal computer should be small, reliable, convenient to use and inexpensive”.

In order to change the world, he recognized that the average person had to be able to afford a computer which was probably influenced by his own experience of not having the means to buy one.

To keep the costs down he implemented many of the engineering ‘tricks’ that he had learned along the way. As the first computer to offer color, he said “it basically cost me nothing to add color” by implementing it through software rather than the need to add chips. He used the same innovative thinking for the clocking, by using one chip and deriving all the other timing frequencies needed.

He related that early design philosophy to the iPhone and how Jobs was meticulous in making the iPhone fully user-friendly. Wozniak said “he (Jobs) sat there and made every little detail work well and not over-complicated.” He also challenged the current design philosophy of Elon Musk in making the Tesla electric car viable and affordable in terms of battery, distance, speed and size. Interestingly enough, the release of the lowest-priced Tesla 3 was just announced for the end of July.

At the conference, much like in his article 40 years earlier, Wozniak stated that the essential elements of effective design thought process, “it has to be simple, elegant, understandable and usable” and of course affordable.

These lie at the heart of the essence of innovation.

It was clear in listening to Wozniak reflect on his journey and philosophy that he is an unbridled genius of the highest order. There was also an unmistakable air of innocence in his words and manner that has seemingly remained intact for all these years. He understands, and appears to have always understood, what happiness is — it’s a simple formula, “happiness = no frowns” he said.

“Building something for yourself, not necessarily for the money, you’re at a huge advantage instead trying to imagine what people would want, you’re doing it for the art.”

As a fellow engineer who has had his share of creative design (of course not nearly to the magnitude of an Apple II), I was left with the feeling that Wozniak was giving everyone the blueprints of innovative thought and maybe even the secret to happiness. That if you distill his words, you would have the magic formula or secret elixir.

We cannot separate Wozniak from Jobs. They are forever linked together. Jobs wrapped Wozniak’s innovative brilliance with a marketing singularity (yes I went there) that changed technology design probably forever.

Steve Jobs had some important failures after their big success. Then went on to innovate more ground-breaking products like the iPhone, iPod and iPad, this time without Wozniak, in his second iteration with Apple. But I believe the the original pairing is where the spark was ignited — without that, the second opportunity for Jobs is never realized or is something very different.

It speaks to a more fundamental question.

Is innovation maximized, if there is no money, no profits and no competition?

Most often, competition makes products better. Without the iPhone setting the gold-standard, what kind of smartphones would we have today? Experts in the field are unanimous that Android phones are better than they would have been because they had to compete against the iPhone. Some would even argue that they are better than the iPhone. I will leave that debate to the partisans.

Certainly marketing alone does not have the ability to elevate or escalate innovation. More features for features sake without solving a fundamental problem which makes life easier will have a very fast half-life, if not outright rejected in the first place.

If you’re a fan of Shark Tank like I am, you witness the amazing innovations that people have created. With little start-up money they go pretty far, relying on their vision, persistence and determination.

We now have the benefit of a 40-year lens to more-fully comprehend the impact the unique combination of Jobs and Wozniak have had on innovation, technology and more broadly, society. Their innovative collective has been pretty much unmatched and it really changed the course of the world.

Will we see innovation to that degree again?

What problem are you looking to solve?