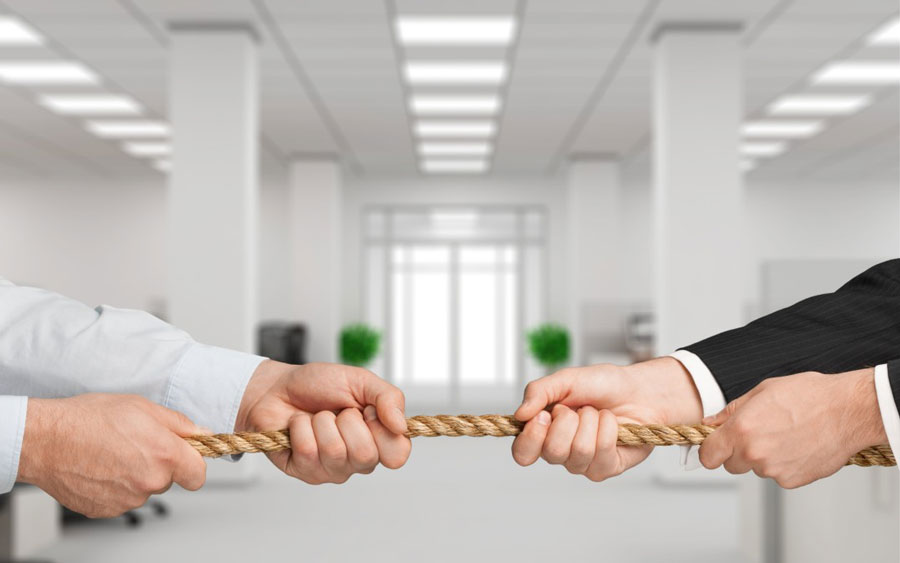 How many times have you wished you could avoid conflict? If you’re like most people, we spend a lot of time trying to stay away from disagreements at work.

We’ve all been there.

Let’s just face it. Conflict makes us feel uncomfortable. It’s unsettling and we don’t like it.

Unfortunately, when you’re working in an organization, conflict is unavoidable. Anytime there’s a group of people that must collaborate to achieve a common objective, disagreements are going to happen. It’s as inevitable as death and taxes.

It’s tempting to think that conflict is a problem that should be avoided at all costs. However, conflict isn’t the problem. The way we handle it is the real problem.

Issues don’t come up because there’s a conflict. They come up because the conflict isn’t dealt with in a productive way. This can cause a myriad of problems. When we handle conflict badly, it can make us unproductive and it can harm relationships between team members. It can also have other negative consequences.

So why is it so hard to handle conflict?

It’s because we don’t bother to learn how to handle it at all. We spend most of our time and energy trying to avoid it.

This is a mistake.

It’s a mistake because of the fact that conflict is unavoidable. You can’t run from it for long. So when it finally does happen, you have no idea how to handle it in a way that is productive.

Instead of running from conflict, we must learn how to deal with it. It’s the best way to ensure that we are prepared to make conflict work for us instead of against us.

When you know how to handle conflict, you put yourself in a better position to find solutions to the problems you are facing. In this way, you can benefit your organization as well as yourself.

One of the reasons we run from conflict is because of the way we view conflict. Since we are taught to believe that conflict is bad, we try to avoid it.

Instead, we need to see conflict as something that can be positive. We should view it as an opportunity to solve a problem.

When we change the way we view conflict, it does two important things:

Our mindset determines how we approach a situation. It influences our actions. The first step in learning how to deal with conflict is adopting the right mindset.

One of the biggest mistakes people make when it comes to disagreements is thinking that they have to “win.” They believe they have to convince the other person that they are wrong.

Don’t fall into this trap.

Chances are, the reason the other person is disagreeing with you is because they see things that you don’t see. Insisting on being right is a great way to damage a relationship and hamper the efforts of your team.

Instead, take the time to listen to the other person. Try to understand where they are coming from. Ask good questions that will help you comprehend the other person’s position.

When you’re in a disagreement with someone, there are two things you need to find out:

Knowing what they believe and why they believe it will help you address their concerns directly, rather than guessing. It also helps you create better solutions.

Find The Areas Of Commonality

When you’re having a conflict it’s easy to focus only on the areas where you and the other person disagree. After all, that’s why you’re having the conflict in the first place, right?

It is important to address the areas of disagreement, but resolving conflict also requires you to focus on the areas where you agree. You must find some common ground.

Resolving conflict isn’t about winning the argument. It’s about working together to discover the most effective solution. You want to handle the conflict in a collaborative style. It’s the best way to turn the conflict into something that will benefit the overall objective.

Let’s face it. In most conflicts, you’re not going to get everything you want. If you’re trying to resolve a conflict in a way that benefits your organization, you need to choose your battles wisely.

Don’t argue over every single point.

Figure out what areas are the most important, then hone in on those areas. Let the small stuff go. Many people miss the opportunity to resolve a conflict because they feel that they need to win on every single point.

It’s not necessary. When working through a disagreement, it’s best to make sure you’re not letting the perfect be the enemy of the good.

A key component in resolving conflict is keeping your eyes on the prize. When you’re trying to work out a conflict, it’s very easy to lose sight of what you are trying to accomplish.

When you feel that the purpose is getting lost in the minutiae of the conflict, you should steer the conversation back to what you and the other person are trying to accomplish together. Remember, conflict is an important part of achieving your team’s goals, and it should be used as such.

However, it doesn’t have to be something that you try to avoid. If your team learns how to handle conflict the right way, it can actually become something you embrace. In the right hands, conflict can be a constructive tool that leads to more effective solutions for your business.